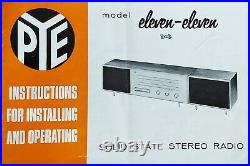 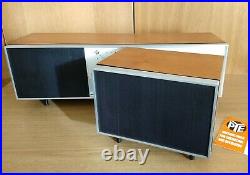 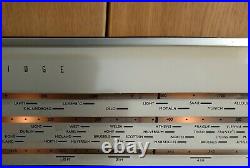 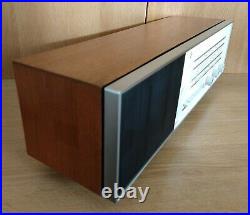 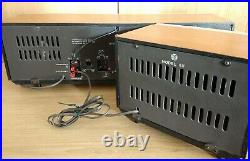 Find another’ as they say. SOLID STATE STEREO TRANSISTOR RADIO. ORIGINAL PYE ELEVEN ELEVEN MANUAL. MW SW LW FM 88-108Mhz. DESIGNED BY ROBIN DAY. The legendary designer Robin Day of the Festival of Britain Fame and. Won the Duke of Edinburgh Design Centre Award in 1966. Very impressive timeless design. You wont find much if anything on the internet besides the odd picture of this table top radio. The Pye Museum, The Design Centre Archives and The Science Museum don’t have one only images of the mono set 1108. This the 1111 model being the much rarer model for which won the award. Condition – Externally it is in very good used shape for its age seeing as it is around 55 +years old, it turns on lights up , volume, tone work and it can be tuned, these have an internal aerial however depending on locality, for weak or distant stations the usual external aerial is recommended. The radio will need a service and the usual refinishing of the gloss paint to the inside of Perspex cover (and on/off button as seen on most all the 1108 models online) which has been allowed for in the price to turn it into a great fully working extremely rare timeless appreciating designed radio. The additional speaker is working but intermediately so can only presume it may only need a resolder when serviced – hair line cracks in knobs. It has never been abused and always correctly stored when not in use for the past good few years. Please study the pictures for condition as they form part of my description and ask for more if required. Dimensions : 2 ft 10 inches long in total x 8 inches high x 7 inches deep approx. Separate speaker is 10 inches long. Approx weight is 8+ Kg. (25 May 1915 9 November 2010). Was one of the most significant British furniture designers of the 20th century, enjoying a long career spanning seven decades. An accomplished industrial and interior designer, he was also active in the fields of graphics and exhibitions. Robin was sought out by the cabinet-making firm of S. Hille & Co, and began a partnership that flourished over the ensuing decades. Hitherto the company had specialized in reproduction furniture, but with the ambitious young designer on board, Hille completely changed direction and embraced modern design. During the 1950s Robin developed an extensive collection of designs for Hille, ranging from utilitarian stacking chairs and tables, to easy chairs and bed settees, to modular storage units and desks. While some of these were for domestic settings, the emphasis was increasingly on the contract market, with organic shapes gradually supplanted by more angular and rectilinear forms. Robins aim was to create simple, understated, functional forms in modern materials with a clearly articulated structure. Commercially successful and creatively distinguished a rare combination his furniture particularly appealed to architects and was championed by the Council of Industrial Design. The item “PYE 1111 Cambridge Stereo Transistor Radio Robin Day Ultra Rare Mid Century” is in sale since Wednesday, January 6, 2021. This item is in the category “Sound & Vision\Vintage Sound & Vision\Radios”. The seller is “bannisterz70″ and is located in liverpool. This item can be shipped to United Kingdom, United States, Japan, Canada, Ireland, Australia, Germany, France, Greece, Italy, Spain, Austria, Belgium, Bulgaria, Croatia, Cyprus, Czech republic, Denmark, Estonia, Finland, Hungary, Latvia, Lithuania, Luxembourg, Malta, Netherlands, Poland, Portugal, Romania, Slovakia, Slovenia, Sweden, Bahrain, New Zealand, China, Israel, Hong Kong, Norway, Indonesia, Malaysia, Mexico, Singapore, South Korea, Switzerland, Thailand, Bangladesh, Bermuda, Bolivia, Barbados, Brunei darussalam, Cayman islands, Egypt, Guernsey, Gibraltar, Guadeloupe, French guiana, Iceland, Jersey, Jordan, Cambodia, Liechtenstein, Sri lanka, Macao, Monaco, Maldives, Martinique, Nicaragua, Oman, Pakistan, Paraguay, Reunion, Saudi arabia, South africa, United arab emirates, Ukraine, Chile, Bahamas, Colombia, Costa rica, Guatemala, Honduras, Jamaica, Kuwait, Panama, Qatar, Trinidad and tobago, Uruguay, Philippines.