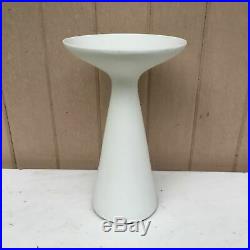 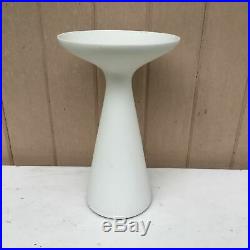 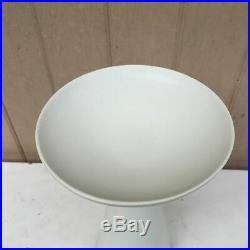 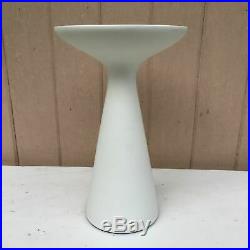 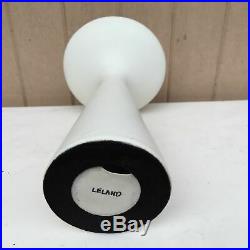 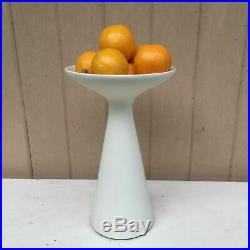 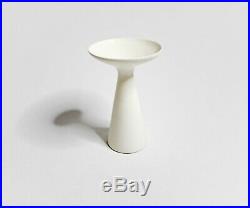 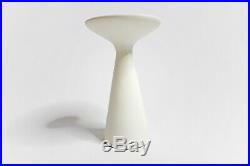 Extremely rare glazed ceramic compote/vase. Pottery designed and produced by Malcolm Leland in 1951. Only a few of these was produced by Mr. Condition : Original vintage condition. Excellent for its age. No chips or major discolorations. Very few minor patinas on the finish that are consistent with age. Authenticity : Signed “Leland” at the base. Measurement : 9.5″ x 5.75″ diameter. Malcolm Leland was born in 1922 in Columbus, Ohio and from the start, displayed a gift for drawing and creating. He attended art school until World War II demanded his service, flying B-17s against Japan in the South Pacific. To our enduring benefit, he chose the latter, moving to El Segundo, California to found Malcolm Leland Ceramics. With little more than a potter’s wheel and a kiln, he immediately found a market for his designs in the high-end shops on Rodeo Drive in Beverly Hills. His work was simple, clean and elegant; motifs which would drive his future artistic success throughout Southern California. The ceramic works, vessels, fountains and lantern modules that were produced during these early years set a promising course for Malcolm’s blossoming modernist reputation and became iconic examples of mid-century design and modernism movement in California. His ceramic bird shelter won the 1955 MOMA Good Design Award. Malcolm became increasingly drawn to structure, and was heavily influenced by Chicago architect Louis Sullivan. In 1957, high modernist architect Richard Nuetra invited Malcolm to create the louvered ceramic facade of the L. Thus began Malcolm’s decades-long career in architectural design, defining the facades and textural elements of many Southern California buildings and plazas. He is best known for his “Bow Wave” sculpture and fountain at San Diego Civic Plaza. The item “Rare 1951 Glazed Ceramic Compote Vase Sculpture by Malcolm Leland, Modernism” is in sale since Thursday, September 5, 2019. This item is in the category “Antiques\Periods & Styles\Mid-Century Modernism”. The seller is “sonder.house” and is located in Seattle, Washington. This item can be shipped to United States.